Growing up in Chicago in the early 60’s, my parents gave me a unique perspective on the way our increasingly multicultural society was headed. I decided to write South Side Story to bring some of the colorful characters, dramatic events, and amusing anecdotes from my teenage years to life, so they could be shared by members of my own baby boomer generation and millennials like the students I teach in my college art history classes. By doing so, I hope readers will see how the issues our society is facing today (immigration, race relations, nuclear missile threats, police actions, and mental illness) are nothing new, and that previous generations have grappled with these conditions as well. All these trends are set against the back drop of a bittersweet love story between the two main characters from vastly different cultural backgrounds. The events and people in this novel are based largely on real characters and situations I experienced while growing up in Chicago, which gives this unique coming of age story the ring of truth. 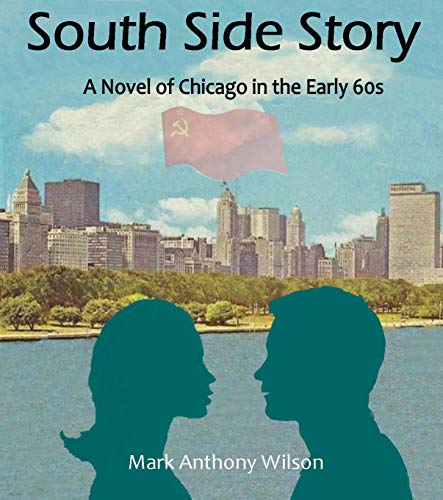 Set during the 1960’s in the heart of what many consider to be the most racially divided, politically turbulent, and socially tense time in American history, narrator and main character William is growing up amidst in all. Living in a racially integrated neighborhood in Chicago, in the home of two struggling artists, William finds his life is forever changed with the arrival of a Russian Jewish immigrant family to the neighborhood. During the ensuing months, as tensions between the United States and the USSR grow, William finds himself stuck watching as the world as he knows it changes forever. A true coming of age story that follows one young man’s journey to adulthood filled with drama, emotion, love and an underlying sense of true terror experienced during one of the most divided times in American history.

Wilson’s novel captures the essence of what it means for a young man to cross the bridge into adulthood and handle the stresses and challenges life presents along the way. A truly inspiring tale based around Wilson’s own adolescence, South Side Story: A Novel of Chicago in the Early 60’s brings to life what it was like to be a teenager during a time of racial tension and political hostility with constant fear of imminent danger.

The story is thoughtful and creative with some of the most developed and meticulously crafted characters. For Wilson’s first published novel, he does a masterful job at creating and developing each and every character throughout the story. Readers can feel a sense of self in the characters and identify with their struggles, feelings, and emotions, despite living in a different time or place

As mentioned above, this is Wilson’s first published novel, and at times it seemed rushed and left me wanting more. To put it short, some chapters moved too quickly, and felt like a break in the flow of Wilson’s writing style I had become engulfed in. Regardless of some minor shortcomings, Wilson still stands out among the rest when it comes to his writing style and story telling abilities.

The novel itself is an incredible work of art as each chapter and character feels meticulously crafted to help readers fully grasp the message of the story. Wilson delivers a well designed and attention grabbing story in just over 200 pages leaving readers satisfied with the story and not over loaded with unnecessary information. The message is clear and the story incredibly captivating. While there are many books taking place in the 60’s full of racial conflict or political unrest, few truly capture the essence and effect the times had on young boys entering adulthood. Wilson’s story stands out on an innovative front as it gives a sense of real life and not a fabrication or dramatization of what it was like growing up in the era.

A fantastic story at an incredible price. It’s only deterrent? It is only available for kindle as a digital book. For $5 you won’t find a better story. And if you already have kindle unlimited? There is absolutely no excuse why you don’t already own this book.

Here are just 3 of the numerous 5 star reviews Wilson’s novel has garnered in just over 2 months since its release!

To see more reviews, click here and be taken to the Amazon page and read all about this soon to be best seller!

To purchase South Side Story: A Novel of Chicago in the Early 60’s or any other of Mark’s books, click the icons below